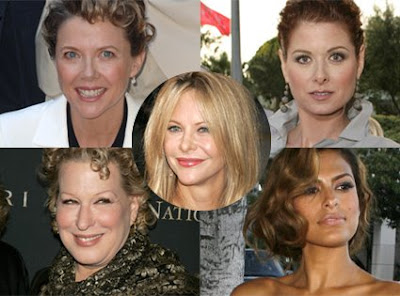 This 2008 version is rather like "Sex and The City" and "Desperate Housewives" had a baby with a little "Waiting To Exhale" thrown in for "diversity". And it's pretty awful, I must say. I kept trying to say "I must watch this as though I am seeing this story for the first time, no knowledge of the play or the film." And it's still awful.

The story is so updated. It is turned into a feminist liberated woman-fest and it makes you want to puke. Even Little Mary is bulimic! At one point Meg Ryan finds Little Mary ceremoniously burning tampons. and saying "I don't want to be a woman." I'm not making this up you know!

To begin with, I cannot get past Meg Ryan as Mary Haines. She's just inadequate and there is no other way to say it. She plays every role the same, and there's nothing new here. She does not take the high road ever in the film. Norma Shearer's Mary rises above the situation through most of the 1939 movie. Meg Ryan wallows in it. And she says "G. D." in almost every speech.

Annette Bening plays "Sylvie" - yes "Sylvie" and she is equally dreadful. She is rarely funny, but then she's not given many funny lines. But she is guilt-ridden and spends the second half of the film APOLOGIZING to Mary Haines. Wrong. Her worst line is "Chanel Number Shit". I kid you not.

At one point Meg Ryan looks at Annette Bening and says, "This isn't a '30's movie, you know!" And we wish so that it were.

Candace Bergen is miscast at Mary's mother. Cloris Leachman plays Mary's cook in a role obviously blown up to suit her talents, and she does toss off the film's few truly funny cracks. The always lovable Bette Middler sorta plays the Countess badly. A really embarrassing outing for Bette.

Deborah Messing plays Edith Potter badly - and eats throughout the entire film, just as she did through "Will & Grace" - awful. We are forced to watch her push out the only male in the film -yes, her millionth baby.

Throughout the screening I attended (there were 8 people in a huge theatre) one woman kept laughing and every time she did I said loudly, "That's NOT funny!" And when someone would pass up the aisle in the middle of the film to go to the bathroom, I said out loud, "Oh God, you're going to miss something! And upon leaving the theatre I went to the box office and asked for my money back. Unfortunately, there was no one there. Dreadful, dreadful movie.

Thank you. I was already not planning on wasting any money on this...this "film," but you confirmed my decision. Some things are not meant to be remade. EVER. What's next from the wonderful mind of Hollywood? A remake of "All About Eve," or maybe "Whatever Happened to Baby Jane?" How 'bout "The Day The Earth Stood Still?"

Oh wait. Nevermind on that one. It's already in the can.

"Baby Jane" has already been remade: with Vanessa and Lynn Redgrave. Pretty awful, too. Richwah

Man you show no mercy Richard. I thought it would suck. When I first moved here to Houston the Alley Theatre was having some summer festival?? and showed old movies one night a week and I went to see the original The Women. I didn't understand then why everyone was "hissing" when Joan Crawford was on screen.lol And I didn't realize till after I left there were no men seen.

No. No mercy at all, since the event cost me almost $20 for ticket, popcorn and Diet Coke. Naw, no mercy.

Would you like to learn about movie rating?
RateThisMovie is a great website where you can learn about the top performing movies

Rate this Movie is a big movie community where you can learn about the top performing movies.

Would you like to learn about movie rating?
RateThisMovie is a great website where you can learn about the top performing movies

Rate this Movie is a big movie community where you can learn about the top performing movies.

Richard Wall
I am a musical director living in Chapel Hill, NC. I appear in the cult film "Parting Glances" as Douglas. I teach singing. I have spent my life in show business, on Broadway and on the road, that long long road.